Another Troy: Poems by Joan Wehlen Morrison to be published soon

Delighted to announce the upcoming publication of Another Troy–the poems of my mother, Joan Wehlen Morrison, that I’ve edited. Reserve your copy today to celebrate National Poetry Month. And many thanks to Steve Wilson, Cecily Parks, and Tina Kelley for their lovely blurbs. Here’s a poem for your to enjoy today:

Here is where you can order a copy of Another Troy at Finishing Line Press.

I’m so honored to share the generous blurbs contributed by three amazing poets whose work I revere.

With growing solicitude at the coming of the Second World War, teenager Joan Wehlen Morrison struggled in her poems to understand the enormous realities of her time while also learning about love and romance, the passage of time, maturity – topics common to most of us at such an age, but topics troubled profoundly by the hatred and loss and violence of the 1930s and 40s. Reading these poems is remembering with nostalgia what it means to be young and setting out.  Sadly, they also echo the deeper question that all of us – young and old alike – are today once again forced to ponder: what is to come of us in a world gone mad?  In Another Troy, Morrison aches for answers, for truth, in the way only a teenager can.

–Steve Wilson, author of The Reaches.

Did you ever own a notebook, and did you open it, perhaps at night, to write about the daily happenings of a world whose pace, magnitude, beauty, and violence staggered your imagination? If so, these poems are for you. Joan Wehlen Morrison‘s Another Troy captures what it feels like to be an emerging political, intellectual, and romantic young woman in wartime—when, as William Carlos Williams famously wrote: “It is difficult/to get the news from poems/yet men die miserably every day/for lack/ of what is found there.” The poems in Another Troy see beauty and brokenness and honor both. “The moon is a bent feather in the sky” in one poem; “there is an empty orchard in Flanders/Rotting in the rain” in another. Tender and aware, these poems cannot help but imagine foreshortened futures, so that when Morrison writes that the “wind was like a boy’s breath,” we wonder if the boy is at war, and if he will live to see adulthood. In other poems, the poet scrutinizes her own life, imagining “this girl in the blue dress and Juliet cap — / I will be utterly disappeared.” Luckily for us, Morrison’s poems have not disappeared, and when she writes, “I am a moving window[,]” I feel lucky to have been able to glimpse the world through it.

Prepare to be charmed and enthralled by these beautiful, sincere poems full of artistry and verve. Joan Morrison, born in 1922, confronts the realities of war and love in witty and learned verse. “But darling, platonic as I know we are,/I fear, against all reason, I still want to be/Immensely Epicurean with you,” she writes. Her work transcends the passing seasons of a nation and a life.

Comments Off on Another Troy: Poems by Joan Wehlen Morrison to be published soon

The New York Times reports how “forgotten Dutch diarists of WWII…speak at last.” Not only Anne Frank recorded her tragic experiences, but many other everyday folks did as well.

“Petronella Jacoba Margaretha Venema-van Nijnatten, recounts events including her arrest, along with her mother, by the Germans during a house search.”

Over 2,000 diaries were collected after the war and are only now getting their just due. They include all points of view, even one woman who admires the Nazis. Joan would have particularly loved the diary of a 10-year-old girl. In the original NYT article by Nina Siegal and Josephine Sedgwick, you can even flip the pages of her little book. 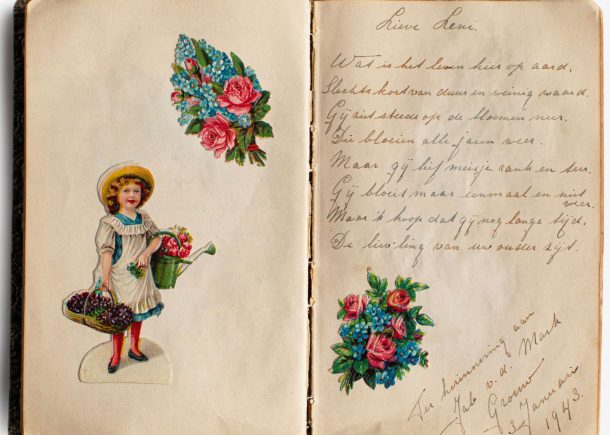 10-year-old “Leni Bijlsma collected poems in an album that was filled with contributions from friends and family.”