Joan’s diaries add to history by giving a personal point of view at a time of political upheaval. Granted, some of her insights are light-hearted.  Here’s her self-reflection at age 14.

Got my hair set today. In my opinion, if I had hollower cheeks, I’d be a perfect double for Garbo.

As a fellow Swede (well, half-Swede–Joan’s father had come from Sweden in 1913), Joan certainly paid attention to the most famous Swedish actress in Hollywood!

But Joan also had profound insights that defy her young age.  Here she is at age 16, writing comments ranging from fashion to woes with her mom to politics.

High—! Well, I went to 11:00 service [in church] with George Hodge this morning. Actually was on time. Wore my new tweed swagger coat and powder blue hat.

“Me, just gorgeous of course,” she writes sarcastically.

This afternoon spent at home . . . Mom and I in our separate cells . . . I was lucky, I had the living room with the radio. Heard “Träumerai.” Such haunting music, but I can’t even hum the tune now.

Well, it seems my prophecy about Easter 1939 [that the war would begin] is wrong but perhaps the world is to go to pieces today. Well, “Peace on Earth, good will to men.”

Father Carr in his sermon lambasted Hitler and Mussolini. It’s easy to accuse them now, but he wouldn’t accuse the greedy statesmen who laid the foundations for the next war at Versailles.

The importance of diaries in history has been fully acknowledged at the National Diary Archive Foundation in Pieve Santo Stefano, the so-called “City of Diaries,” in Italy. 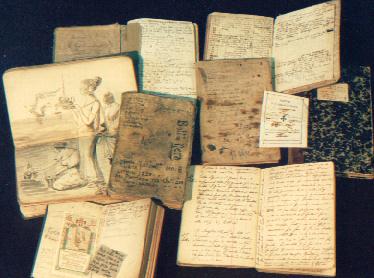 Diaries from The Archives
of Pieve Santo Stefano

As Elizabetta Povoledo writes in her New York Times article, the founder, Saverio “’Tutino believed that everyone is one of many, and together we become history.'” As Loretta Veri, “the archive’s former director who now raises funds to support it,” says, Tutino “’used to say that we are privileged to hear the rustle of others, that paper voices always made a sound.’”

Povoledo writes that artists and playwrights have been inspired by “the 39 scraps of paper scribbled in a Rome jail by 18-year-old Orlando Orlandi Posti during the last six weeks of his life. Arrested on Feb. 3, 1944, for warning his friends about an impending roundup by German soldiers, Mr. Orlandi Posti managed to smuggle his thoughts — mostly expressing his devotion to a girlfriend — out of prison, rolled up in the collar of shirts destined for the laundry. He became one of the 335 Italians who died on March 24, 1944, at the Ardeatine Caves in Rome in reprisal for the killing of 33 German policemen by Italian partisans.”

Entry to caves in the Fosse Ardeatine Monument. From http://en.wikipedia.org/wiki/Ardeatine_massacre.

As the Archive’s director, Natalia Cangi, says, “‘Diaries go on to have other lives.'”

Joan would never have expected people to read her teenaged diaries, though she does welcome that option.  As she writes at age 19,

Heard Stephen Vincent Benét[1] tonight on “Poetry and History.” He was remarkable. Clear yet forceful. . . . He appears to think we can come out of the war thumbs up. . . .

Mr. Benét was talking about diaries in history and I believe I have written mine with the intention of having it read someday. As a help, not only to the understanding of my time—but to the understanding of the individual—not as me—but as character development. Things we forget when we grow older—are written here to remind us. A help not only in history but in psychology (I can’t even spell it). If I can do that I believe I shall have done all that I could wish to. I rather like the idea of social archeologist pawing over my relics.

Home Front Girl is the non-fiction Kindle Daily Deal, selling for $2.99 for today, August 12th, only.  Please go here to see how you can buy it and let your friends know!

Jim’s requests for schoolgirl photos go unnoticed or at least unremarked upon by Norah and they settle into a fun and flirtatious correspondence through the summer of 1941. For now, there are no more worrying letters, just the complicating factor that is Danny, Jim’s younger brother, who is now on the scene.

Remember it is Jim who first puts Norah and Danny in touch. A trainee officer in the RAF, Danny is on a course at Loughborough College, the Leicestershire town where Norah has just finished her schooling. Jim arranges their first meeting for the 5th July, but Danny fails to turn up. The following week he sends Norah a ‘beautiful letter’, informing her that he is going to a RAF base in Wiltshire. He writes again from there, another grand letter, to say he is going home for seven days (‘on a motorbike’, Norah adds).  30th July: Went to Forester’s Sale. Ma bought coal bucket etc. Received letter…