Facebook RSS Feed
← Norah’s American twin
Let’s give credit to teens! How can Joan be so literate–and literary? Part 2 →

My mom was a girl when she created her diary.  One of my favorite magazines is also girl created — New Moon Girls.  It’s a magazine written entirely by girls!  It also has beautiful artwork by kids as well.  I used to get a subscription for my lovely daughter, Sarah, until she moved onto The New Yorker.

New Moon Girls is now an interact social media site with  all sorts of features:  including Changing the World, Body and Feelings, Arts and Culture, and even Games. 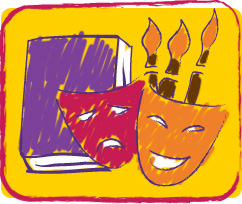 The magazine is wonderful because is doesn’t succumb to the worst of cultural pandering concerning young women.  Rather, it is respectful, supportive, and challenging in the best way.  As the magazine description states, “Our bi-monthly magazine is 100% advertising-free, highest-quality content for girls age 8 and up! You won’t find diet advice or popularity contests here. New Moon Girls magazine is about helping girls discover and honor their true selves, engage in meaningful pursuits and dialogue, and express their voices in ways that matter.” 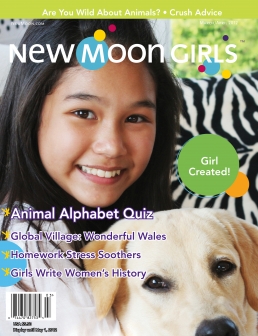 Cover of the March/April 2012 edition

It’s an amazing organization — where else can you find a magazine with a “Girls Editorial Board (GEB) made up of girls age 8 and up from the U.S., Canada, and the U.K.”?  Do check out this page with lots of information about Partners who can help girls and their families.

The July/August 2013 Issue [Our Favorite Places] features a lovely review of Home Front Girl.  You can read it and my suggestions on writing your own life here.

I also participated in a Live Chat on July 30th hosted by the girl reviewer, Julia Rockwell.  I’m so grateful to her for everything!  Here is the transcript of that fascinating chat: NewMoonMorrisonchat.  Thanks for participating, everyone!

Joan also participated in several publications, though not a magazine by girls, for girls like New Moon Girls.  Joan also loved writing. When she was 14, she worked on a “newspaper” for English class.

. . . Yesterday I handed my English project in—it was a mythology newspaper, rather cute, I must say. “Zeus Sued for Bigamy,” “Apollo on Sit Down Strike—Objects to Daylight Savings,” “Pegasus Wins Olympic Derby.” And I wanted to put “Mercury Freezes” in, but I didn’t. I put a picture of Pegasus on it and wanted to paste it in art. I asked Mr. Johnston for paste and, oh gosh, he said he’d paste it for me (he thought it was for art). At first when I explained, I thought something awful was going to happen, but I’m still alive. Mrs. Hellman read the newspaper to class and said it was good and showed a fine sense of humour. Hmm? Hmm! That’s me!

Joan also worked on the newspaper in high school and college.  Various zany things happened. I’ll include just two.  The first is from when she was 16 and a student at U-High [the University of Chicago Laboratory Schools].

. . . Well—made deadline in Midway office by writing till 6:10. I am promoted on masthead to “feature writer.” Very newspapery atmosphere there—typewriter pounding, scribbling of pencils, people running in and out with hats on—and much yelling, “How many words did you want?” Also competitive noises from the next-door Correlator[1] office through skylight. Oh—such is the life vita dulcis.[2]

Today was the Midway deadline and as Midway office was crowded, Fraser and Bruce invited me into the French room where Bruce was editing “Potpourri”—so I went to write and bite my pencil and Rosalind Wright came along to chaperone or something. They three talked French while I scribbled or tried to—finally Rosie left and I continued; they started to talk about my hat in French as I gathered from “Joan’s chapeau” or something of the sort. . . . They said it was “de trop” and so forth which unfortunately I could translate—of course it was a little screwy.

Finally we got put out of French room—wandered into art room and studied modern results of p.e. (progressive education), limbs floating around, etc. Oh well—Bruce draped himself up as some Roman in a green tablecloth affair and we all howled heartily till we saw the cleaning man was spying on us. Then Fraser and I began to discuss the Second Oration (our outside reading) which is decidedly not a subject for mixed company.[1]

Midway office was still crowded so I retreated in Correlator office where Kenneth was typing. He has a unique method of bouncing paper off typewriters but I won’t go into that. I swore I’d be quiet as a mouse and started out to do so. Fraser and Bruce came in—talked to me—I tried to be quiet but no can do. Fraser began to recite his Greek something or other and Kenny shouted vainly, “Quiet!” Then Bruce finally retreated and Oliver came in to write his sports page—got along O.K. for a while, then Dick came in and tried to figure out his pet ambition which was the “Inquiring Reporter” question this week. Then we started to talk about the assembly today and he wouldn’t let me answer anyone else, which got Oliver mad and delighted Kenny.

Then we started on ambitions again (Kenny had given up by this time) and no one could think of anymore till Kenny said, “To seduce Mae West,” which nice little girls didn’t talk about when I was young, so I gulped and continued to smile brightly and changed the subject (more or less). . . .

Finally Kenny put us out, as he was going home. I turned in my article and Dick lugged in my coat from the deserted Correlator office. He put it on me too and as it was the horrid seventh grade relic (as my other’s at the cleaner’s) all the holes showed gorgeously. . . . Oh well. . . . Someday I’ll be a genius. Bruce wants to be a psychiatrist (I can’t even spell it!) but I wouldn’t let him examine my brain though Fraser said I wouldn’t miss it. (Grrrr.)

[1] Presumably because of its references to unpleasant subjects.

Finally, on a personal note, I am indebted to Helen Cordes, Executive Editor of New Moon Girls. 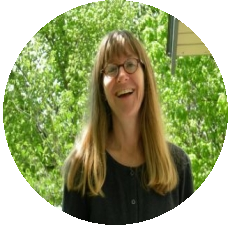 I met Helen the week both our husbands began teaching at Southwestern University in 1993.  We were in a bank and, as I recall, she had a baby with her–a baby who is now studying in graduate school with (coincidentally) my nephew.  My husband and I joked that if we wanted anyone to home school our children it would be Helen.  But she was busy with her own kids!