Imagine Thanksgiving in 1933.  The Depression had been afflicting the U.S. for four years.  Franklin Delano Roosevelt had been in office since March.  Were things going to improve? 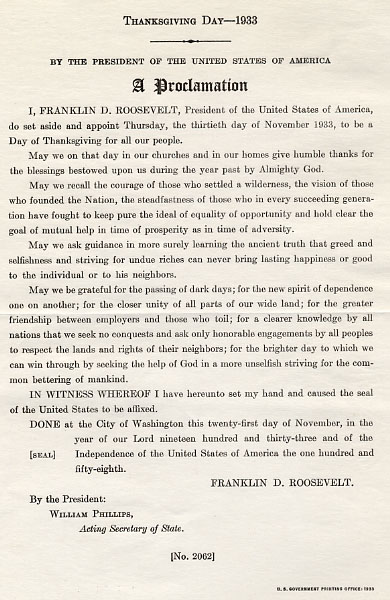 He says on November 30, 1933, “May we be grateful for the passing of dark days; for the new spirit of dependence one on another; for the closer unity of all parts of our wide land; for the greater friendship between employers and those who toil; for a clearer knowledge by all Nations that we seek no conquests and ask only honorable engagements by all peoples to respect the lands and rights of their neighbors; for the brighter day to which we can win through by seeking the help of God in a more unselfish striving for the common bettering of mankind.”

He adds that we should reflect on, “the courage of those who settled a wilderness, the vision of those who founded the Nation.” You can read another speech he made on Thanksgiving Day at Warm Springs, Georgia. 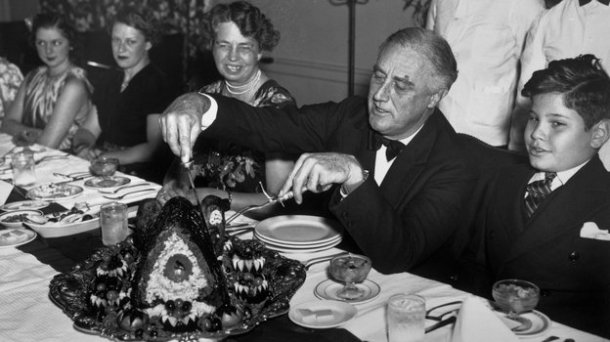 President Roosevelt celebrating Thanksgiving with polio patients at the Warm Springs Foundation for Infantile Paralysis Sufferers the Friday after the national holiday in 1938.

Thanksgiving had a odd custom in the 1930s-that of Ragamuffins.  Apparently children dressed in oversized rags and begged on Thanksgiving.  The New York Times in 1936 writes, “Ragamuffins Frowned Upon: Despite the endeavors of social agencies to discourage begging by children, it is likely that the customary Thanksgiving ragamuffins, wearing discarded apparel of their elders, with masks and painted faces, will ask passers-by, ‘anything for Thanksgiving?’”

You can read more about them here.

Like FDR, Joan was also thinking about those early colonists.  In her little poetry notebook called Flutterings, she writes this poem on the last day of November 1933.

On the last Thursday in the month of November

Every one of us should remember

Those pilgrim fathers who gave thanks then.

We give thanks for so much more,

Than those pilgrim ones of yore.

This day we dedicate to Thanksgiving,

When we give thanks that we are living.

So now this day in November

Of those pilgrim fathers we should think and remember.

Posted in Susie's Blog. Bookmark the permalink.
← Camelot in Joan’s imagination and the JKF Assassination
Thankful for Tradition: my mom Joan, son John, and Studs Terkel →