Facebook RSS Feed
← Arise, the workers of all nations! — Voices from the Past on International Workers’ Day
My Mother’s Voice →

Still no news so had a good old weep

Joan’s English “twin” Norah learns the ship her beau is in has been in a sea fight. Much anxiety–but also humor!

When Jim’s letters fail to arrive at the end of April 1941, Norah’s disappointment soon spirals into high anxiety. She hears on the wireless that his ship, HMS Elgin, has been under fire from enemy aircraft. She seems not to know at this point in time that there were no casualties among the crew. All she has at her disposal is the information that some of his shipmates have brought down a Heinkel and her imagination of the horrors involved. 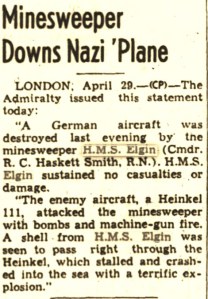 Norah will have heard on the news about ships around Britain that had been bombed, damaged, blown up or sunk. In that week in April alone, one ship in a convoy near Cromer went down, as did an anti-aircraft vessel off the Tyne. HMS Raleigh took a direct hit at Portsmouth, leaving 42 dead and 13 injured. A minesweeper off Millford Haven  was ‘mined and sunk with all hands lost’.

Posted in Susie's Blog. Bookmark the permalink.
← Arise, the workers of all nations! — Voices from the Past on International Workers’ Day
My Mother’s Voice →