My mom, Joan, wrote every year about Memorial Day in her diaries from the 1930s and 1940s. World War I was always fresh in her mind, though it was a conflagration finished well before her birth. Here is a diary entry from when she was 17 years old, reflecting on poetry, war, the suffering of animals in zoos, and even one of my favorite medieval poets: Langland.

“Me, turning red faced from the class!”

…Well, Thursday (Thor’s Day!) I was very embarrassed.  Mrs. Hellman, my English teacher, read my poem “City” aloud to class—you know, after she found out I had won Honorable Mention in Scholastic, but I never thought that she’d read it to the class!  Was my face red.  She tried to make me read it but I broke down and she had too.

…A teacher accused me and the girl next to me of ditching a study to smoke—me! —with my face!  Of course, I wasn’t though—it was all a mistake.  In the midst of bawling me out, the teacher stopped and said, “You’re the girl who wrote the poetry for Scholastic, aren’t you?”  How did she find out?  I thought only fools read that (though that includes her!).

…. Friday night Mom and I went to Lake View to see Il Trovatore—given by American Opera Company.  Mom went to sleep during it and I had to hold my eyelids up!  Are we cultural!

Mom and I went downtown and I got me a new peasant –dusty pink – dress.  I look like the “Song of the Lark”[1] or something.  It’s a dirndl and awfully cute. 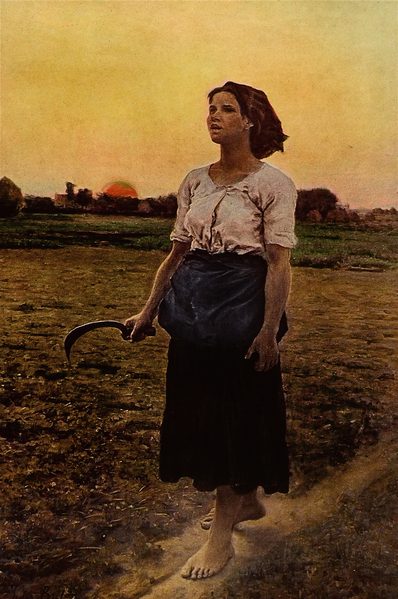 “Song of the Lark” by Jules Breton

B.B.B.B. [Beautiful Blue-eyed Boy in Biology Class] didn’t come Saturday as I told him not to.  Vera got walked out on by a boy again.  She’s going to start using Lifebuoy [Soap].

…. Today—got up at 12:15.  It’s Memorial Day.  Read New Poetry and Modern Poetry books—Went to park to read the borrowed one in my peasant dress — laid my annual sprig of white hawthorn by the soldier in the park and whispered, “I remembered” to him.  There was no new wreath for him, save mine.

Sat by the pool for a while and read.  There was a big St. Bernard dog near me and three fair-haired children in sailor coats—James Barrie in Kensington Gardens.  Went on to zoo.  The eagles look so misplaced in the ugly dark cage.  What right have they to keep another living thing from the sun?  And the baby lion (1½ years) who was born there.  He looks like a strong man in a shop.  Such a beautiful fierce young lion to never have felt the touch of Earth at his feet.  Always inside.  No moon, no sun, no grass.  And for a young lion he is so still.  He just sits and stares over our heads at things he can’t see.  The other lions seem to see the jungles when they look like that, but he has nothing to see.  Nothing at all…. He has a great chin as of one who has suffered and tragic golden eyes.  I wish I could give him a piece of the jungle.  Oh, it’s all so cruel!  And here are people who have been likewise cheated….

In this book of poetry there’s an introduction to English verse—I like this Old English[2] one:

In a somer seson

When softe was the sonne

I shoop me into shroudes

As I a sheep were

In habite as a heremite

Wente wide in this world

I sort of like the serious, old sound of it—and yet not old.  Langland is his name.