Bob Morrison in the Navy 1944. A neighbor years later took one look at it and, concerning my dad’s sailors, quipped, “Boy, I bet they were scared of you.”

My dad, Bob Morrison–born September 30, 1918–was so funny. Even ones we’d heard a million times were still hilarious. 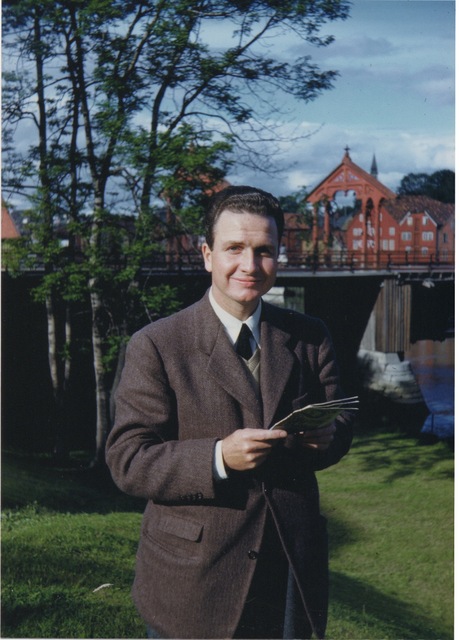 We still tell stories and jokes he related to us. My kids now tell jokes about the bishop and the actress (rated X so I can’t relay them here). 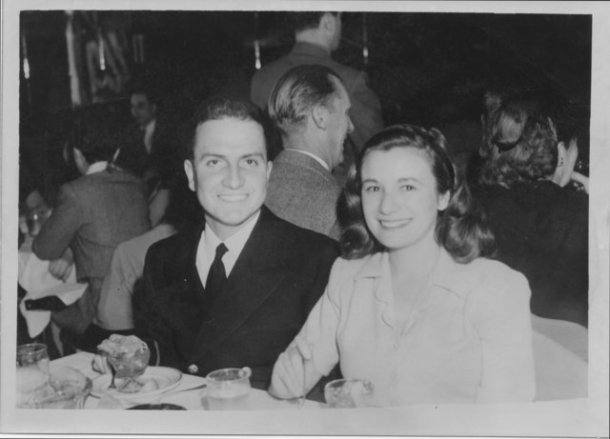 Bob and Joan at a nightclub during World War II.

I remember the clear cold day we met

All ice and shining snow and sun dazzling but chill.

The trees black and lacy against the snow-hills

And the figures of people standing out clear on the landscape.

You, with your green changing eyes turning to look at me

War, even the war is beautiful, because it is so expected.

This world could not exist if there were not the undertone of tragedy.

The black shape is always moving

Across the face of the bright moon.

The songs that are trite to us now

May make us weep sometime because they bring back

Days that were when everything was yet to be done

And the world lay far below us—

Still to be ventured.

We may even cry because we remember

And the “Strip Polka”[4] will seem quaint and old-fashioned.

The day we first met

On a hill, while the world lay below us

Painted with black trees on snow

Traced with the steaming breath of cows

And black wisps of smoke from chimneys

And hills beyond and a white road—

Still to be ventured.

Darling, if we come to nothing

Let’s not forget that.

We stood on top of the world once.[5]

You still stand on the top of my world. Happy Birthday, Daddy!

Mom and Dad taking a selfie in the 1940s while canoeing in the waters between Minnesota and Canada. Cropped by my dear son, John.

[2] These are all lines from popular songs of the time.

[3] A song from 1942 about a man “five feet tall and five feet wide.” Harry James and others made it popular.

My brother, Bob, writes about this image, “a favorite photo of him, from 1986 while walking on a country road near Thorpell House in Wickham Market when he and Mom were in England for a year. It’s not very good resolution, but his spirit is there (and his familiar walking clothes.) I always think of this image as “‘Golden Dad.'”

Here’s one of the songs mentioned in Mom’s writing, sung by Bing Crosby. Once my parents were on a bus and my father, who had a lovely voice, crooned to my mother. The people behind them said he sounded just like der Bingle!

[4] A song by Johnny Mercer, including the immortal lines often intoned by my father: “‘Take it off, take it off,’ cries a voice from the rear.” The song was made popular by the Andrews Sisters in 1942.

Posted in Susie's Blog. Bookmark the permalink.
← On the Occasion of My Parents’ 75th Wedding Anniversary
Armistice Day, 1941 →