My mother, Joan, grew up to be an interviewer of many people.  As an oral historian, your sources are people.  People of all walks and stations in life. 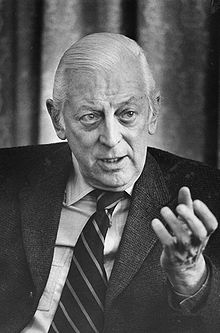 Her two co-written books contain dozens of moving stories of everyday people — and some famous like Alistair Cooke, John Lewis

Rubin speaking at the University at Buffalo in March 1970

In high school, I remember she and my dad would sometimes take me out of classes early.  We’d drive into New York City so Mom could interview Pauline Newman, who survived the Triangle Shirtwaist Factory Fire of 1911 and grew up to be a famous union organizer with the International Ladies Garment Workers’ Union.  Other times we drove in so she could interview other sources for her book.  While she interviewed, my dad and I saw double features of old movies from the 1930s and 1940s at art houses like the Little Carnegie Playhouse, the Thalia, or Bleeker Street Cinema.  Afterwards, we’d meet my mom and eat at the now defunct Copenhagen restaurant for herring and smorgasbord or pasta at Minetta Tavern in the Village.

Joan’s interviewing skills started in high school when she ran the Vox Populi (Voice of the People) column for the school newspaper.

. . . After lunch I went to teachers’ lunchroom to ask questions for “Vox Pop”—“What’s your idea of an ideal pupil?”—teachers all male. Mr. Heaton says one who brings apples every morning. I shall remember that sometime. Mr. Trumpell asked me if I wrote the column every week—he said he got a kick out of it—especially my terse remarks, says he. (I looked up “terse” in the dictionary; it means, “elegantly and forcefully concise”—that’s me!). . . . I had to get my picture taken for Cosmopolites[1] today. Sorta sickly smile on face of all.

[1] Evidently a club for those who are cosmopolitan.

This interview has unexpected — or perhaps not! — consequences!

And then today—oh, today was a lovely day. In the morning from the L, the world was real and tangible in the bright air and the sunlight. Then when I got to school (one minute on time), the boy behind me started to tell me how what Mr. Heaton said for my column brought results—You know for his “ideal pupil,” he said one who brings apples every day. Well, it seemed every one in the school took the hint, for there was Mr. H. with apples, apples, apples of all kinds on his desk—big, little, even one with a ribbon on it. Well, it proves someone reads the column, as my editor cynically said. In the middle of the class during organization paper writing, Mr. Heaton came up to me and said, “Well, I suppose you want your share of the loot.” And I said, “Oh, of course! I expect my commission.” And he grinned and said to take my pick. So at lunchtime Bobby Smith and I went up and took some big red apples while Mr. Heaton grinned (he’s so cute!) and Richard Schindler looked puzzled. As I explained, it will stop the Depression—fruit stores sell more, pupils get A’s, Mr. Heaton gets fat and I get my commission.

Apple Sellers in Depression. From http://www.britannica.com/EBchecked/media/97369/Man-selling-apples-during-the-Great-Depression

Once she starts at sophisticated U-High (connected to the University of Chicago), interviewing is not exactly what she expected.

I got to school early this morning. . . . I planted myself in front hall and pounced on everyone who came in saying, “Describe your ideal U-High girl” . . . One of them wanted a “glamorous blonde with a slinky walk.” Hmmmm.

I think my mom found that boy quite amusing!

November 14, 1938. Doodle by Joan of her class and teacher laughing at her trying to find Volume 1 (not 2) of Thucydides. She has lost a tooth.

Speaking of interviews, I’ve had the good fortune to have been interviewed by lovely people since Home Front Girl came out.

Trilla Pando’s lovely review of Home Front Girl came out a while back. But I just came across Trilla’s blog describing how she got into reading it. It’s really fun!

“[B]eing a reviewer for Story Circle Book brought me just what I needed! Home Front Girl: A Diary of Love, Literature, and Growing Up in Wartime America appeared at the front door as if on cue. I’ve been journaller about as long as I can remember. A one-year diary showed up under the Christmas tree every year with the same dependability as the doll at top of the red stocking, and continued even after the dolls went away. I made my most recent entry this morning. Part of my life. I was ready, ready for this book.

Joan Wehlen Morrison was a greater journaller than I. What’s more, while I assume “no one’s ever going to care about these” and store them helter-skelter and here-and-there, Joan wrote thinking that her journals would be read, stored them carefully, and made sure her writer daughter knew where they were.  That daughter, Susan Morrison has turned these journals into a story of both her mother’s life from when she turned 14 in December of 1936 to 1943 when she met her future husband of 66 years. But Morrison has done more. She’s captured a slice, a small slice but an important one, of American history. This is an important book. 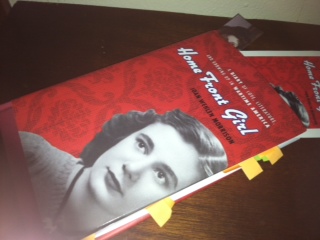 Trilla’s copy; she writes, “Well read now, and I’ll be reading it again.”

And inspirational to me. My next get-organized is not going to be the mess under the kitchen counter that’s on the schedule now. No. I’m going to take those boxes of disorganized mixed-up journals and diaries and get them in chronological order, and then, I’m going to read them.  It may be that some do indeed need discarding—I’ll do it now, and I’ll be the one to do it. But others I’ll keep and who know, while likely they will never be published, someday great or great-great grandchild may enjoy knowing what twentieth-century life was like in the Panhandle of Texas.

And thank you, Trilla!