The Heroism of First Responders and Ordinary People: Army Nurses in World War II: “So Proudly We Hail” (1943)

The terrible events of this week– the bombing at the Boston Marathon, the explosion in West, Texas, the killing of the MIT police officer — remind us how vulnerable we are.  And how the simple bravery of ordinary people, from first-responders to passers-by on the street, reveal the honest compassion of humanity.  Such generosity of spirit was also seen in the World War II period.

The other night Turner Classic Movies hosted a number of films starring the beauteous Claudette Colbert.  So Proudly We Hail (1943) riveted my son and me.  It stars the lovely Claudette Colbert,

along with Oscar-nominated Paulette Goddard,

and, in an unusual role, Veronica Lake.

Based on a memoir that had appeared early in 1943 written by a nurse, Juanita Redmond Hipps,

who had been in the Philippines as it fell to the Japanese, So Proudly We Hail follows the lives of a group of nurses, sent out for the U.S. to the Pacific before Pearl Harbor.

Here is a military trailer of the film.

The nurses cannot land in Hawaii after December 7th, and carry on to the Philippines.  There they set up camp on the peninsula of Bataan. 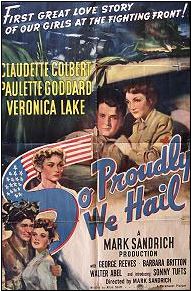 Tragedy ensues as Bataan is taken over by the Japanese.  They flee in rickety boats to the island of Corregidor where they live in a huge tunnel complex with thousands of soldiers.  But this underground space of safety is likewise doomed.  Ultimately, the group of nurses the audience has come to know are evacuated to safety.  So Proudly We Hail came out in late June, 1943, not long after the evacuation from Corregidor. You can read more about the real “Angels of Bataan” here. 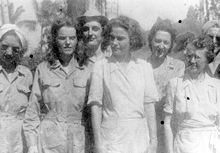 A recent highly acclaimed book, The Rape of Nanking, exposes the massacres and mass rapes committed by invading Japanese forces in Nanking, China in 1937-8.  These facts were well known at the time.

One of the more unusual aspects of the movie So Proudly We Hail is an exchange among the nurses as the Japanese are due heading to take over their hospital on Bataan.  One nurse says she was at Nanking when it was invaded and saw what the Japanese did to the women there.  They fought like animals over women and then said it was the privilege of the imperial army.  None-too-subtly, So Proudly We Hail takes on the issue of the fear of rape of American nurses by Japanese troops.

In Joan’s diary, she writes about the invasion of Nanking.

. . . The other day Japan bombed three American ships[1]—one a gunboat—that were in some Chinese harbor and everyone thought there was going to be a war—there wasn’t though, so it’s all right—I hope.

P.S. Italy and Germany and Japan have a triple alliance now—whatever that means. And the Japanese had a peace assembly at Tokyo this week and are still killing people in China—nice world, isn’t it?

. . . Last night we went to show and saw Norman Alley’s Bombing of the [USS] Panay. Pictures before and after and all. I wonder how he knew when he made them that those pictures would be so important. An historical document—the paper says.

You can see the actual newsreel Joan saw here.

I had a horrible dream about war again last night. In my dream I could see the countries of China and Japan spread out before me on a map.[2] I could see people milling about in both countries and in the eyes of the Chinese, in all the eyes, there was a hurried bewilderment and there was a horror in my heart. Someone explained to me what was happening. “The Japanese are too many to fit into their own country so they are sending many of their people over to China.” And I could see it happening—the crowds of people hurrying over the narrow strip of water to China and the ever-thickening bewildered crowds in China, hurrying nowhere. “But,” I asked, “What will happen to all the Chinese—there are too many!” The answer came—slowly and surely, “They will be killed—deliberately and quickly—every one.” And I shouted at my dream, “But they can’t do it—they’re human beings—the Chinese!” And the words were repeated, “They will kill them—everyone.” And an awful horror filled my mind and I saw the people—all of them, hurrying faster—and faster—to nowhere. And faster!

[1] Joan wrote this entry shortly after the horrific Nanking massacre and mass rapes inflicted on the Chinese by the invading Japanese army.

In So Proudly We Hail, one character makes the ultimate sacrifice to save the others.  To understand it, let me tell you more about Veronica Lake‘s character. Lt. Olivia D’Arcy is played in an atypical role by  Lake.  Lt. Janet ‘Davy’ Davidson is played by Claudette Colbert.

Olivia has been rude and obnoxious; none of the other nurses like her.  Finally, a confrontation occurs between her and her senior officer, Davy. The  scene can be viewed here.

It is clear that Olivia is suffering from what we would call PTSD [posttraumatic stress disorder].  Courtesy of IMBD, you can read this shocking dialogue.

Later in the film, when the Japanese are shooting in the hospital grounds, Lake takes a grenade from a dead American soldier.  She tells the others to flee.

Better that one dies so the others will live.  Lake hides the grenade in her overalls and heads out to the Japanese with her hands up.  We think she will pull the pin and throw it at the Japanese.  Instead, she gets close to the enemy and when they are close to her, she pulls the pin killing them — and herself. You can view a section of the film with this incident here. 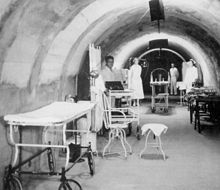 The entire set up for the movie circles around PTSD.  The movie begins after the nurses have been evacuated and they are on their way home.  Davy, the lovely Claudette Colbert, is swathed in blankets and practically comatose.  The ship doctor says she’ll die because she wants to die.  Only if he hears her story can he help.  So the film didactically walks us through all the nurses have experienced.  Davy’s real crisis concerns her beloved, play by George Reeves, who later became famous as the Superman of the 1950s television series.

American films made soon after the U.S. entered the war can be extremely grim in their tone.  At that time, people didn’t really know who would win.  The ending of this film succeeds in encouraging the audience to keep supporting the war to help save nurses like these.  But the glossy light trickling through the clouds over which the words The End appear does little to rouse hope in the viewer’s heart.  Like the first-responders and normal bystanders today, they were willing to sacrifice themselves for others, either through dying or impairment or loss of  peace of mind.