How can Joan be so literate–and literary?

At a book reading at BookWoman in Austin, Texas, dear friends and colleagues came and listened to my reading of sections of Home Front Girl:  A Diary of Love, Literature, and Growing Up in Wartime America.  They had wonderful questions and suggestions–even that I should make an audio recording of it, which I would love to do!

One person commented on how literate Joan was.  Some might ask how it could be true–that such a young girl was so literate.  But Joan came from a literate family.  Her parents, though working class, loved to read and discuss literature–fiction and poetry.  They even met at a night school called The Lewis Institute, now part of Illinois Institute of Technology.  Joan grew up reading Kipling, Tennyson, Sir Walter Scott, Shakespeare, Edna St. Vincent Millay, O. Henry, and Christopher Morley, the novelist.  Their writings aren’t particularly “easy”–but if you don’t have easier things to read, you just read what you have and assume it’s expected of you to master such writings.

If anybody had told me a year ago that I’d be taking poetry from the library and reading it not only willingly but joyously (!), I would have thought whoever it was crazy!  However, it’s true.  I got out “A Shropshire Lad” [by A.E. Housman] and am really liking it.  I never thought it in me.  I also got out Pope’s translation of the Iliad, but it looks forbidding so I haven’t started yet.  However, I’m still human as I also have (on my new “adult” card, of course) “The Garden Murder Case”[i] and a Christopher Morley book[ii].  So fear not for my mind.  But I do like poetry.  It’s quite surprising really.  I haven’t quite recovered from it yet.

Here is Joan reciting A.E. Housman to herself in the park. 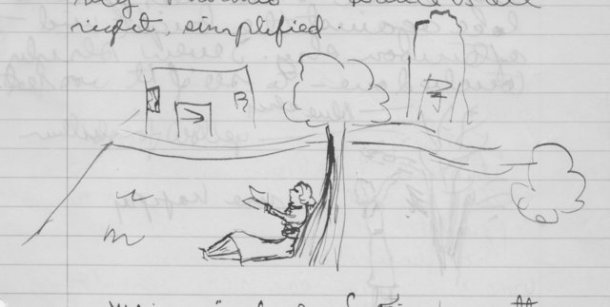 Joan reciting poetry to herself under the forsythia