Armistice Day: The Fascination of World War II in England and America

Today is November 11 when Armistice Day is commemorated in many countries to remember the end of World War I in 1918.  World War II stems out of the aftermath of World War I and both wars continue to haunt Europe.

The fascination for World War II plays itself out differently in England than in America. When my husband and two children and I were living in London 2003-2004, there was a photo exhibit in the National Theatre called “The Atlantic Wall Today” with photos by Ianthe Ruthven.

Ruthven visited German gun emplacements in Normandy that had been built as part of Hitler and Albert Speer’s “Fortress Europe.”  Now they look like medieval castles or temples, covered over with lichen, ivy, and graffiti.

Here’s another of Ruthven’s amazing photographs. 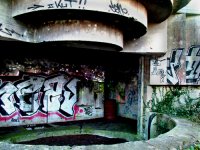 On one gun emplacement, someone had scrawled, “Do you think I’m sexy?”  World War II isn’t “sexy,” especially for those in Europe, Asia, and north Africa, since fighting and suffering actually took place there.

The vestiges of WWII you can find on every street in London.  The house we rented was in an authentically grim Victorian street right by Waterloo Station, in an area that was once ignored and now gentrified.  The flats across the street had been bombed out during WWII; you can tell because the brick is a different color from the rest of the buildings on the street.

This is our beloved Whittlesey Street where we lived in London. The street was bombed on the north side of the street.

The memory of a famous boxing ring we passed right by every day when we took our kids to school had been destroyed by a V2 rocket in 1942.  It is commemorated with a plaque.  World War II is geographically present all over the UK.

Here you can see listed the V2 explosions. The one that destroyed “the Ring” I mention about seems to be described in this entry as “Blackfriars Bridge Road junction with the Cut E side.”  The Cut is a major thoroughfare.

We passed The Ring everyday on our way to our kids’ schools. It was destroyed in World War II and subsequently rebuilt.

The visceral death and destruction on the American home front was minimal.  Not, of course, for Japanese-Americans in internment camps, or German-Americans or Italian-Americans likewise sequestered, not for African Americans who were prevented from drinking from the same water bubbler as whites even though they were being sent over to put their lives on the line, not for the sailors torpedoed as merchant marines in the North Atlantic—no, the story of WWII is not “sexy” for all these people.  And not sexy for those who died, far from home.

If you want to find out more about what Armistice Day is, please look at this post of mine.